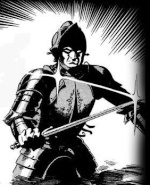 Lieutenant Colonel John Malcolm Thorpe Fleming "Jack" Churchill, DSO & Bar, MC & Bar (16 September 1906 – 8 March 1996), nicknamed Fighting Jack Churchill and Mad Jack, was a British soldier who fought throughout the Second World War armed with a longbow, and a Scottish broadsword. He is known for the motto "any officer who goes into action without his sword is improperly armed."


As the Pacific War was still on, Churchill was sent to Burma,[3] where the largest land battles against Japan were being fought. By the time Churchill reached India, Hiroshima and Nagasaki had been bombed and the war ended. Churchill was said to be unhappy with the sudden end of the war, saying: "If it wasn't for those damn Yanks, we could have kept the war going another 10 years."[3]

"You wanna see my claws?"